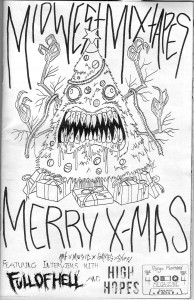 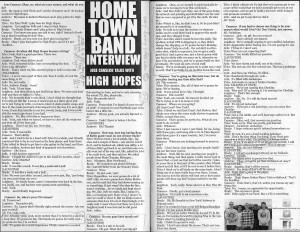 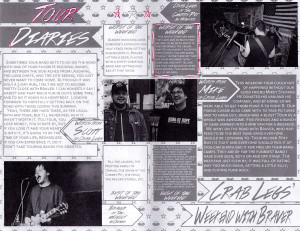 Among the movie reviews, videogame reviews [The Walking Dead in this issue], restaurant review [Crave Burger], local artist interview [Megan Turner who makes jewellery from animal bones], comics, album reviews... nothing beats MM's band interviews. I go mad underlining parts of these, they are so funny. Like when MM's Jose Canseco asks the band High Hopes if they had to choose one thing to be the band's mascot, what would it be. All immediately say, "Jackalope!" After a big chunk of jackalope discussion, drummer Arik admits that as soon as they get signed to a major label, he's gonna get a jackalope tattoo. Guitarist Brady one-ups Arik by vowing to get a jackalope tattoo on his ballsack, but then says, "Anyway, that's off the record" to which MM's Jose replies, "No, none of that's off the record."

The other band interview is with Full of Hell. Interviewer Sir Nils Olav asks about bands that influenced them.  Guitarist Spencer says that their biggest influence ever is psychedelic powerviolence band from the mid-90s called Gasp. I was hooked right there. Some readers will know how much I'm a total sub-sub-genre nerd, and the hardcore genre 'powerviolence' is enough already, but when 'psychedelic' appears in front, I start drooling. The interview is only two paragraphs in and already it's got the two thumbs up from me, dude. I'm off to check out some Psychedelic Powerviolence.

My other favourite thing about this issue is the 'Top Five of 2013' where every one of MM's staff writers [that's 12] reveal their Top 5 favourite albums of 2013. I was surprised by how many times Miley Cyrus's 'Bangerz' album appeared. Maybe I need to check this out...

Midwest Mixtapes is now 'infamous' for its 'Booty Appreciation' page and this issue features Christmas booty - a guy and a girl standing in front of a Christmas tree - booty bare with Christmas lights wrapped around their butts and legs. 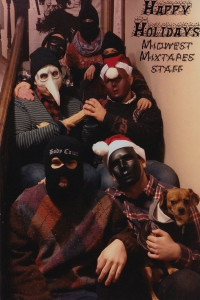