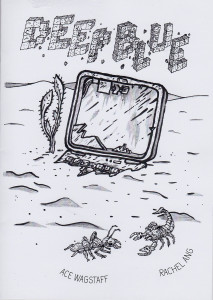 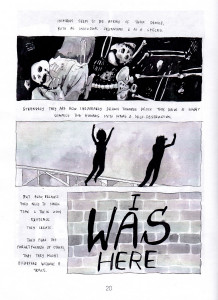 This is the other comic Rachel sent me [see review of its companion here.] Rachel's back and this time brought Ace Wagstaff along for the ride. There is no indication who did what and one of the four strips in here was not very good at all - in a really standout way - compared with the other three, and I found myself hoping that it wasn't by Rachel. Ha ha! Anyway, I emailed Rachel to ask her who did what, and was pleased to find out that Ace did that awful one. Phew!

Anyway, the first strip 'Deep Blue' by Ace Wagstaff is about a sentient laptop stuck on the moon and musing about its predicament, and life itself. It was pretty good, not bad. The main thing that stood out for me however was a technical issue - the contrast and brightness wasn't adjusted, so you could see the texta marks from colouring in the blacks. Although, I guess it could have been left that way on purpose, so readers could appreciate the artist's brush stroke patterns...

The second strip - Rachel's 'Dreams' - notes the lucky/unlucky reality of dreams being far more interesting and imaginative than the awake brain is capable of. And finally, the dreamer finds herself upon waking - "Sometimes I have to do a drawing to keep the dream alive ... But it never works."

The third 'strip' is the offender! To call it 'the ugly duckling' or 'runt of the litter' however would be cruel to ugly ducklings and runts of litters. All it is, this 'Minimal Reserve', is squiggles drawn from a distance then zoomed in closer and closer and back out again. It's like somebody smoked a bowl and drew and drew but forgot to re-examine their 'awesome drawing, dude!' the next day, sober, and just sent it in.

The fourth strip, 'Alien', is the highlight of the issue for me. An examination of human activities and behaviours from an alien's perspective. [The alien crash-landed but managed somehow to perfectly blend in and go unnoticed, but that's not the point of the strip, ha ha! ... Although now having noted that, I wouldn't mind reading more stories about this alien and its experiences on Earth...]

Wow and this one is six bucks too! But! [Butt?] Buy this one AND the other one [Rachel's Draw By Four] and you still couldn't buy a packet of bloody smokes in Sydney for that!
Tags: ace wagstaff, deep blue, rachel ang, reviews
Subscribe