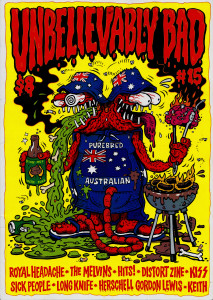 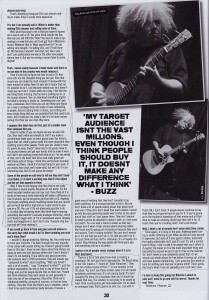 There's a really great interview with King Buzzo [The Melvins] in this issue. Anybody interested in the CD vs. Vinyl 'war' [and 'war' isn't too strong a word when it comes to the ferocity with which many in the respective camps defend their beloved format, and attack the other] will enjoy [or be driven to rabid objection of] Buzzo's comments. I'm quoting a paragraph, but that's just a small part of what he had to say about the subject...

"Jem Moloney: Some of the people we sell vinyl to tell me they don't have a turntable, or at least a working one. But it's the object and the art that appeals to them.

King Buzzo: Well, if they're only buying vinyl then they're not really interested in sound quality. Because it's not better. It's the worst recorded medium you can buy. Just if you think of it in terms of how much static electricity will make a difference in how it sounds, you're not gonna get that with a CD. Anybody that knows anything about mastering knows that you cannot get as much low end or high end on a vinyl record as you can on a CD. You can't! It's not physically possible to do it. So what they're hearing when they think they're hearing something like warmth is actually analogue distortion, which isn't there to begin with. Or it's a compressed sound."

There's an interview with Portland hardcore band Long Knife, and one part is about a gig that took place on a pedestrian bridge that cops broke up [but not until the bands had all finished]. One of the bands that played was called Iceage, and here's the part I found hilarious - for what reason, I can't explain:

[Interviewer] Furious Luke: I'm going to go out on a limb to say that  I think Iceage would sound like dogshit on a bridge.

Joe [from Long Knife]: I think you're not wrong.

Another very funny thing about this Long Knife interview - it seemed that every second person mentioned was being visited that same day, but not just that same day - in less than an hour! Example 1: Talking about the music video for their song 'Negative Mental Attitude' and a guy in it who plays a monster, Long Knife Colin says "I'm gonna see that guy that played the monster in less than one hour, if you'd like me to take a picture with him." Example 2: Long Knife Colin again answering a question about Fred Cole [from the band Dead Moon] who recently had heart surgery - "As far as I know he's all right, I haven't seen him in a while. I've seen their drummer, Andrew [Loomis]. He's a pretty good friend of mine. I may be seeing him within a half hour."

Last but not least [since of the three, it's the music of RH I like the best] the interview with Tim 'Shogun' Wall from Royal Headache was absolutely fascinating. I didn't circle any parts of that one - I would have to circle the whole thing which is impossible because it goes for five pages and circling that with a pencil would defy the laws of physics.

This issue's awesome cover art [by Marty Schneider] is the best UB cover since that of UB#8 [by Donny Rat].
Tags: reviews, unbelievably bad
Subscribe