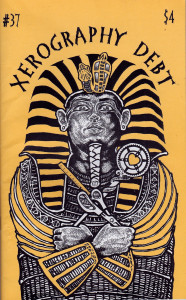 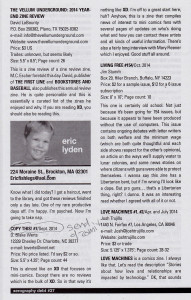 [WTF I just noticed I hadn't posted anything about issue 36 the last issue of XD. Slack bastard.]

This issue was held up by some technicalities at the printer, but here it is, at last! And it's one of the strongest issues in memory. That's mainly due to the quality of the columns. Following Davida's editorial where she tackles the sometimes controversial decision - that she made early on - to only feature positive reviews, Anto Loserdom writes about the Irish zine scene [and this is a tiny fraction of what he's written about them - his final thesis at college was on zines]; Gianni Simone interviews dojinshi/manga creator Kacho 'Chicken' Hashimoto - published in France but still without a contract in Japan]; Jeff Somers discusses the 'zine safety valve'; Joe Biel writes about a zine workshop in Colombia [Columbia, South America, that is]; Josh Medsker writes about a recent prized acquisition - a late Beat-era literary journal called The Floating Bear; Kari Tervo takes us backstage to the zine-making life, with 'Things Nobody Tells You When You Start Zining', like "You're probably gonna have to get a long-arm stapler.'; and Ken Bausert elaborates on his idea that "...many zinesters conduct a sort of Trading Post with each other."

The rest of the issue features zine reviews grouped by author. I was going to write "the usual gang of idiots", but this gang subtly changes from issue to issue. For example, the difference between this issue and last is that Donny Smith is on the bench but William P. Tandy joins the team (albeit with only one review. I thought three reviews was the minimum required! Isn't that right, Lyden? Haw!)

One last thing I must mention is the name of one of the zines reviewed in here - I Beg to Differ: My Responses to Reviews of My Work that Appeared in Xerography Debt or Would Joe Biel Know a Good Comic If It Bit Him On The Ass by Chris Sabatini/Maybe Parade. Naturally that was the first zine in this issue I sent away for. You better accept my diary comic as trade, Sabatini, or I'll give you a bad review! [...Although I don't know how I'll do that if he doesn't agree to a trade... Hmmm, maybe I haven't thought this through... etc.]
Tags: reviews, xerography debt
Subscribe