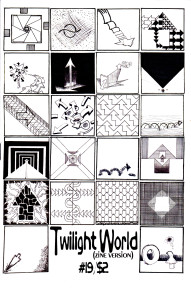 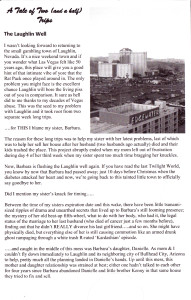 This is a perzine, a really great one! Don writes about his far-flung family coming together in Laughlin, Nevada. Kind of an ironic name there since the object of the meet up was a memorial for Don's sister Barbara who died from diabetes in the heart. There's no cheap sentiment on display here though, it comes across more like a black comedy. Being myself a sometime editor, I can't help but point out this zine is riddled with typos, but not your everyday kind of typos. Check out some of these: "..bragging her knuckles.."; "..wasn't much to see or do in this down.."; "..apocopate bandages.." Don employs some unusual turns of phrase too, for example: "I tend to assassinate myself quite easily in the area of face recognition." There's also a terrific description of some evangelist Christians on the Las Vegas strip, who Don calls "God's Guilt Parade", and how they became quite mean when they realised people were ignoring them, or just taking photos of them: "At this point, it wasn't a religious act, it was out of sure spite; the more we either ignored him, took pictures of him and/or laughed, he got more spiteful. This lasted for 10 minutes until the rest of the now Spiteful For Jesus parade caught up with him..."
Tags: don fields, reviews, twilight world
Subscribe