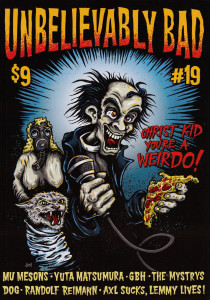 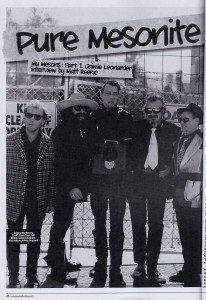 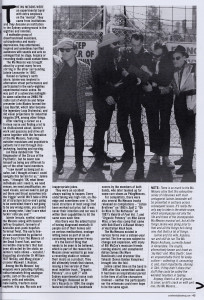 Bloody hell! I take a few months off, and the next thing I know, UB is up to issue friggin' 19! I checked the last one I reviewed here and it was #15. Crikey!

Some great stuff in this issue - best of all is the "Part 1" of a Mu Mesons/Jaimie Leonarder interview. One of my absolute favourite documentaries ever is 'Love & Anarchy: The Wild Wild World of Jaimie Leonarder'; and one of my Top Three favourite Radio Shows Of All Tim [along with Tim Richie's Punk Program [1980s] and Maynard F Sharp Crabbes's Saturday morning radio show also from the 1980s] was The Naked City [early 2000s], so this ongoing series sure is welcome!

This issue's cover by Jimmy Fatal. But what's the deal with the cat? Why is it wrapped up?