Mysteries [aka The Dann Files]

This all started just after Dann posted his Comics Reading For June 2017 blog post and I saw that he had 'awarded' my May 2017 diary comics issue one star out of five but had written nothing to explain the reason for such a low score. I wouldn't usually care about these kind of ratings except for what it implied in this situation - the situation being that Dann and I have been 'zine pals' for years. Included with the copy of my July 2017 diary comics that I senrt to Dann was a note asking him about the low score for my May issue, but weeks went by without a reply. Then his Comics Reading for August 2017 blog post appeared the other day and this time not only was there no review, but there wasn't even ONE star! Anyway, here I am putting the pieces of this puzzle together... until I can get some kind of answer to this disturbing, Bizarro World mystery.

Dann reviews my first diary comics issue for 2017! [from his blog]

Stu is back in 2017 with a second volume of STRATU'S DIARY COMIX (Stratu, PO Box 35, Marrickville, NSW, 2204, AUSTRALIA or http://blackguard23.livejournal.com/). The January issue comes with a personalised cover, which is pretty damn cool. "I'm doing these for - at least - January and February," he informs me. If that's not enough to entice you, then Stu's day-by-day comic diary will keep you informed and entertained on the life and times of one of this country's premier underground artists and zinesters. As he puts it on my personalised cover: "Good mail days...Instagram obsession...internet shopping addiction...and much more!"
B&W copies are AUD$4pp ($5 overseas), while colour copies are $9 ($10 overseas).
Dann Lennard's review of my March and April 2017 diary comics [from his blog]:
169.-170. Stratu’s Diary Comix March-April (self-published, 2017) ***¼
Writer/Artist: Stratu
I love Stu and this is a fascinating exercise of self-discipline, but the cupboard is bare when it comes to intellectual or entertaining reading material. Friending and blocking people on Instagram, internet shopping, TV shows or films he’s watched, vaping...there’s just not a lot of depth in what’s purportedly a “diary”. And I understand that dilemma – when I briefly did my own diary comic last year, I gave up because I was unwilling to share my most intimate thoughts to strangers. So what I was left with was the mediocre, mundane (and occasionally interesting) minutae of day-to-day living. The few times Stu explores more personal territory – like hanging out with his aunt or talking about how a certain person has let him down or helped him or whatever, then the zine gets more interesting. But those moments are a few and far between. That said, I did appreciate Stu’s mention of Seoul Station (the anime prequel to the excellent South Korean zombie flick Train To Busun. It encouraged me to buy it). I appreciate Stu’s work ethic and artwork (the personalised cover on the March issue was lovely). I note that he’s changed the format for April, turning it into an A6 digest (maybe for monetary reasons?). Either way, this zine is fine if you’re a friend of Stu’s and want to know how he keeps himself busy every day, but I wish it was so much more.

That one star was why I wrote this note that I sent Dann along with my July 2017 issue: 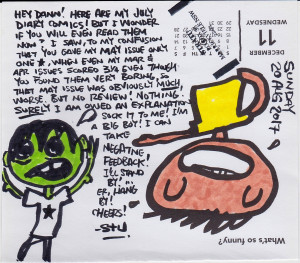 At this point I wanted to find out what the hell was going on here. Does he really think my diary comics are so awful all of a sudden? This was the guy who was so impressed with my 2015 diary comics that he decided to have a crack at it himself, beginning in 2016!
StratuAugust 31, 2017 at 5:14 PM

ZERO * out of ***** this time! Now that's really saying something without saying anything! I'll ask again - after my request following your one-* rating of my May Diary Comics - I really would appreciate [if not deserve] a review/explanation.