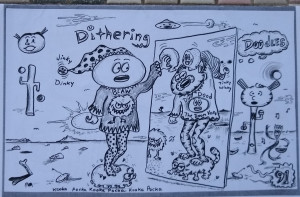 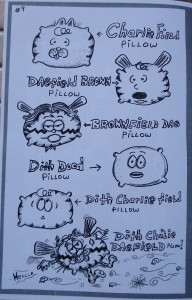 Steve had been MIA for a year or two, so it was a great surprise the other day to receive an envelope containing four of his fairly recent issues [60, 67, 91 and 93].

DD91 finds the Dith Dood in a VA hospital waiting room with his father, waiting to see the doc about his dad's cataracts. To pass the time, he examines a February 2017 issue of Better Homes & Gardens, and begins doodling; modifying and mutating various bits and pieces from the magazine in his wonderfully warped way: behold! Dith Dood mushroom & cheese sourdough toasts, facial masks, doggie treats, anti-balding snake oil, and more.

The back page reveals that this issue, begun at 6:30am 18 June 2019 at the aforementioned VA Hospital, was finished at 1:37am the following day [which makes it - although Steve doesn't put it this way - a 24-hour comic!]
Tags: comics, dithering doodles, reviews
Subscribe