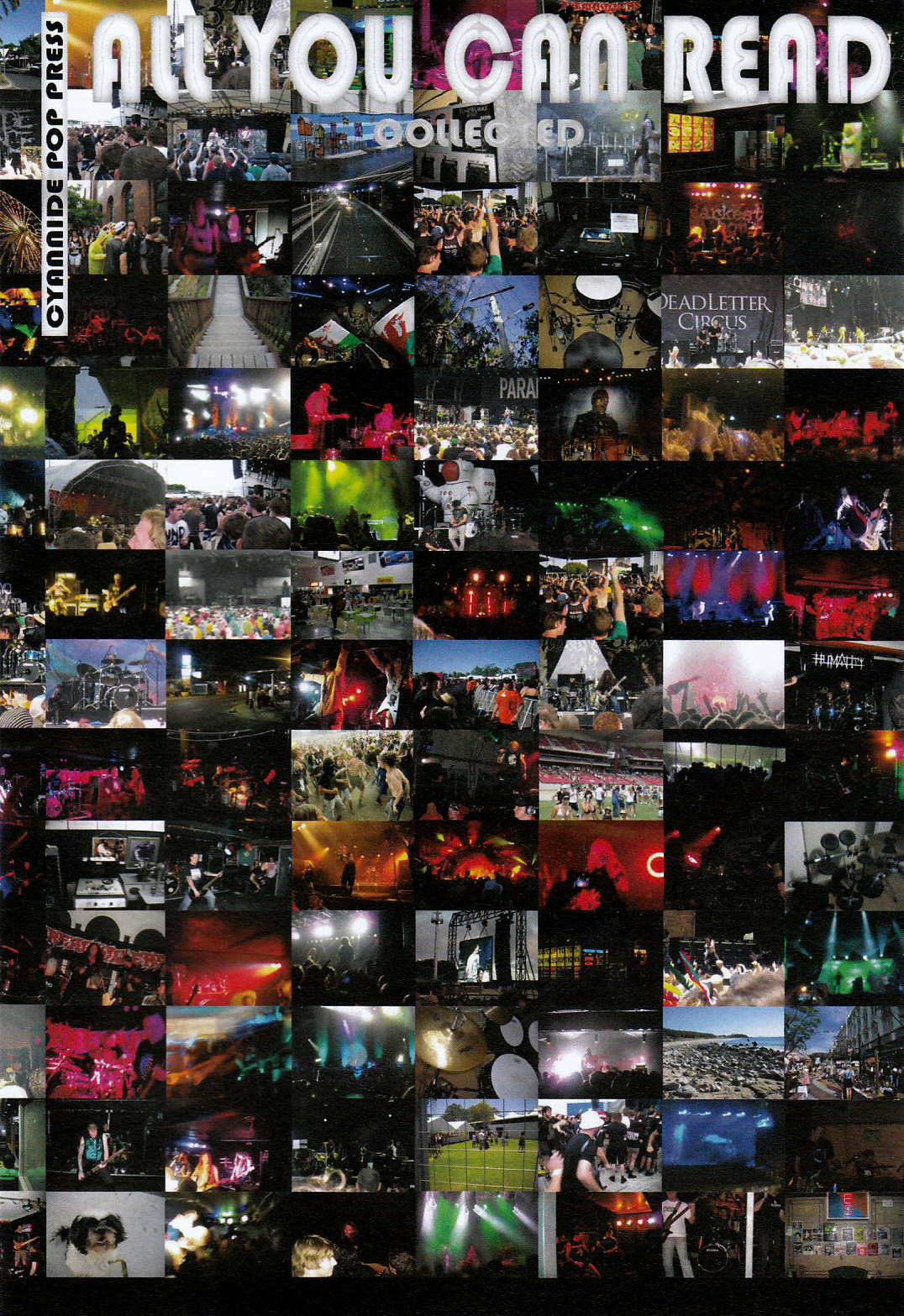 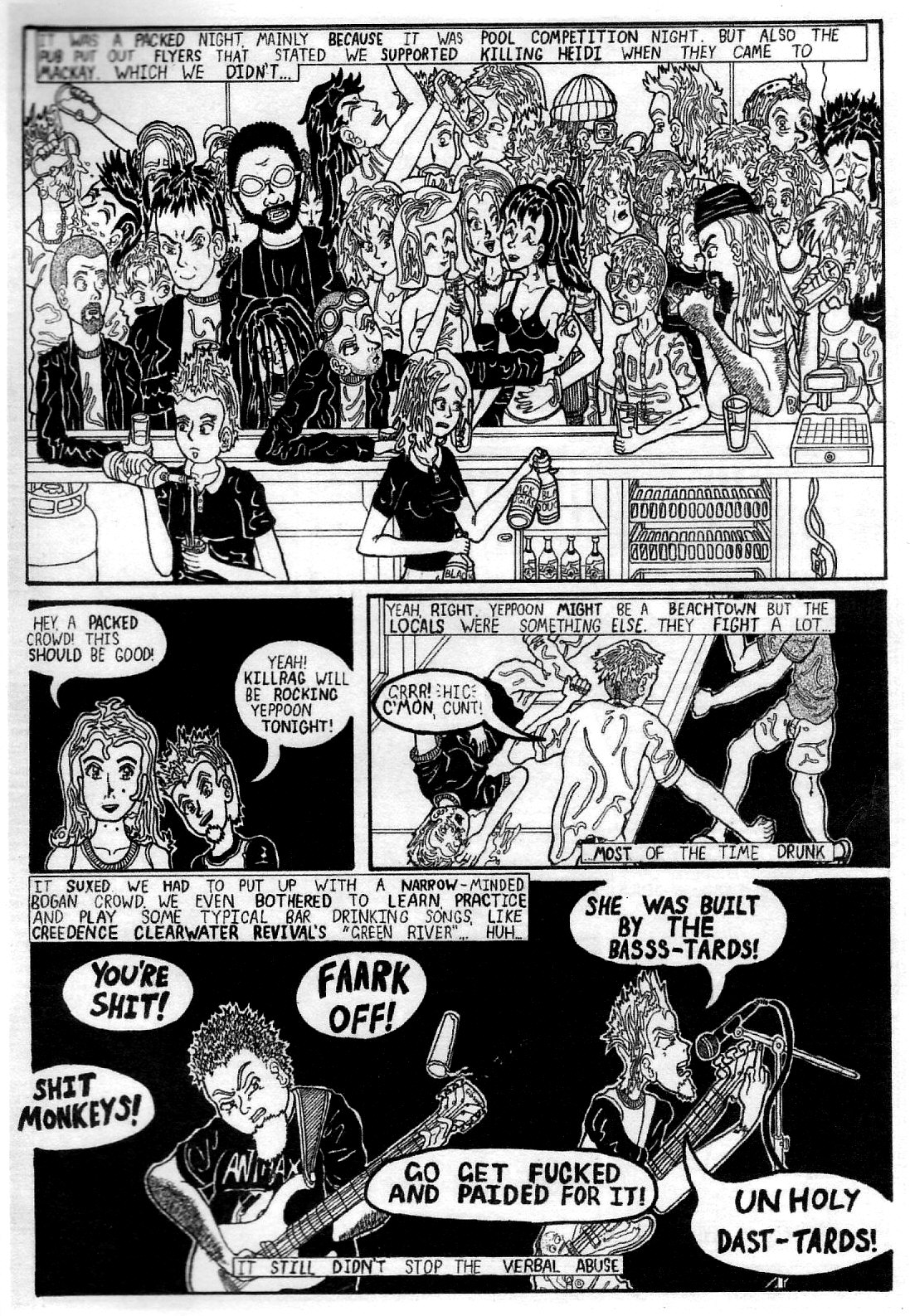 48 pages, digest, by Shaun Craike, email for price/trades >>> scraike81 [at] hotmail.com + www.shaunc.deviantart.com
"Stop! This is not a new All You Can Read issue!!!" writes Shaun in his intro. What it is, is a reprint of AYCR#1 [2004] and AYCR#2 [2008] since those issues are almost gone, plus he wanted to make a new cover - "A much better version of the second issue, which I copped a lot of crap over." (So it wasn't just me? Heh heh.) The new cover makes it look like a music zine, and although Shaun is heavily into music (favourite band: Fear Factory), and plays in bands, and most of the contents are band/music-related, it's all comix here. Starting off with confessions and criticism of where he spent most of his life so far (Mackay, far north Queensland), including inhabitants thereof (like Josh the chronic masturbator), and fuckwits at local cover band gigs (the drunken  douchebag who falls over then says to the barmaid, "Hey gimme a VB!" She replies, "No way, pal." To which this well-mannered young charmer says, "Gimme another beer, slut, or I'll smack ya!" A road trip with his friend Al to Townsville descends into boredom so they play Count The Roadkill (total: 127). A story about Shaun's band El Honeyflood and one member who turns out to be a junkie, and the subsequent trickiness of telling him he's outta the band, and the fallout from that. Pretty dramatic! There's also a cool strip about going to Brisbane to see Fear Factory. During their set they stopped and Christian held up a sign, 'Weed Please', and the stage was showered with pot bags. There's also a few gig flyers Shaun drew for their band.
Shaun's comix are really great. Get some.

Anybody know why all of a sudden I upload an image but then can't click on it to get a full size version?
Anybody else having this problem?
Also, when I share the link on Facebook, no image appears like it used to.
Fuckity-fuck. 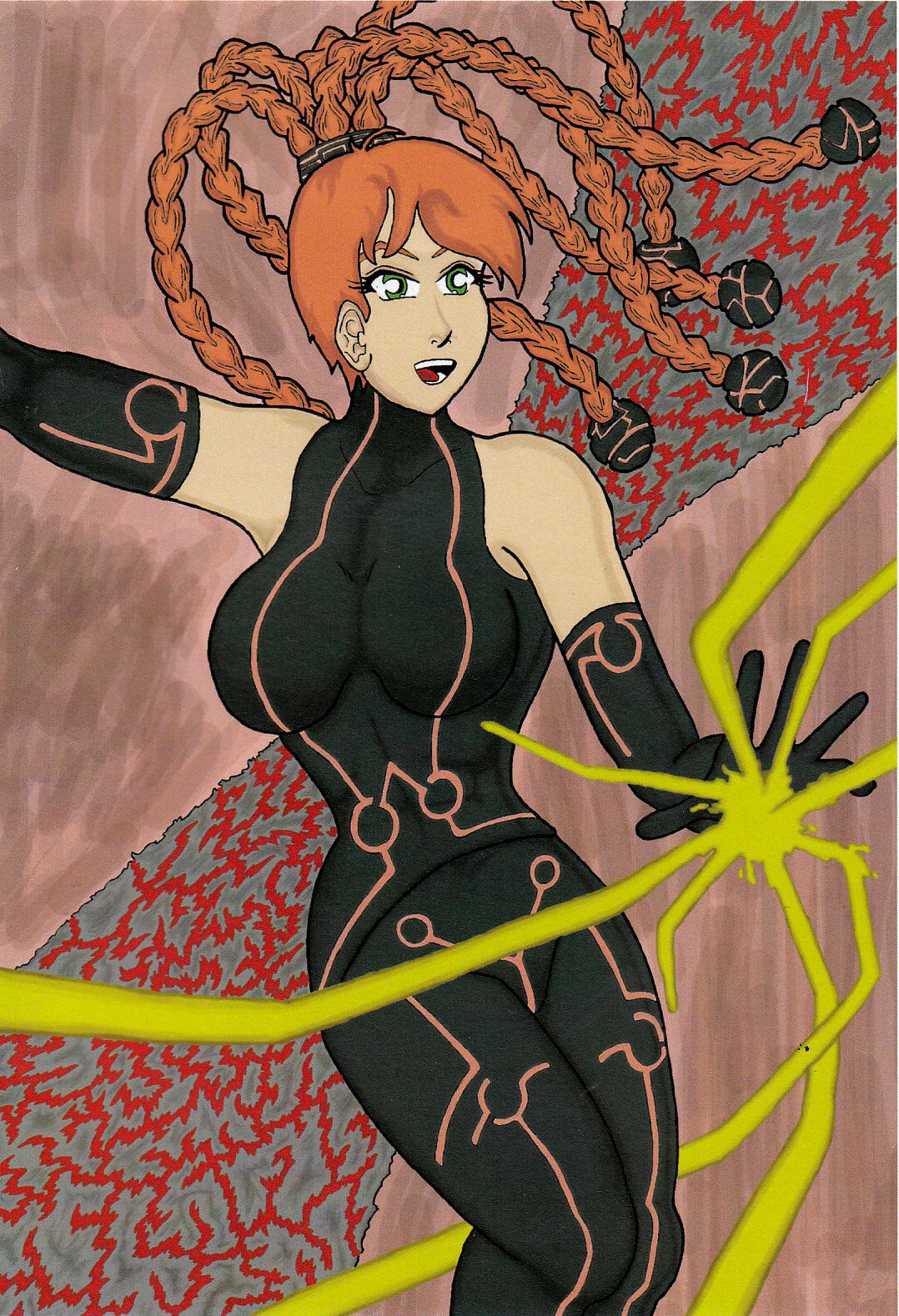 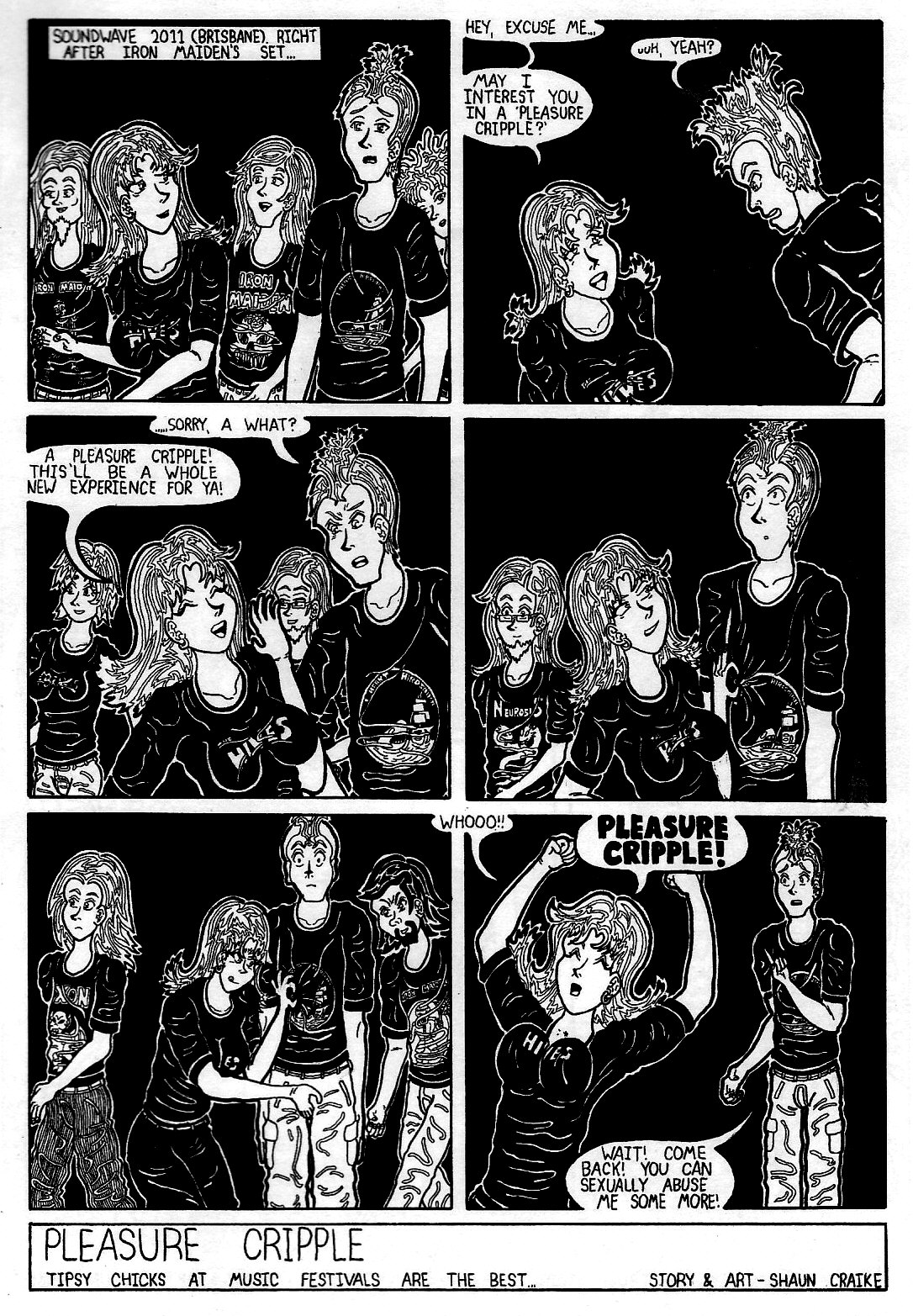 ADULTS ONLY! 28 pages, digest, by Shaun Craike, email for ordering info >>> scraike81 [at] hotmail.com + www.shaunc.deviantart.com
In his editorial, Shaun admits that the comix in this collection were produced in 2010, an "utter shit year" for him. "But instead of going in the corner and sulking there for the rest of my life (which I did for a little while), I decided to get on my feet and make more comic material." Right there he pretty much nails the cathartic power of art, some of the best, most powerful and enduring of which comes from dark places, rather than those of happy happy joy joy contentment. I mean, do you really wanna read a comic about how awesome the author's life is? No, you don't.
Anyway, Retro Orange brings together comix that appeared in Phatsville Comix #17, Groovy Gravy #13, Blackguard #4, and one "...originally illustrated for the Severed comic anthology which never saw print". Why did that anthology never see print? More information please! Well, a loss for that anthology because Shaun's strip is a very funny and gruesome twist on the unrequited love theme.
There's some bonus stuff that hasn't appeared anywhere else, and even the stuff that appeared elsewhere, you probably haven't seen all of it (I know I haven't ... Groovy Gravy? I thought the last issue of that came out in the '90s! Huh!)
One strip I didn't get - 'People That Sell The Big Issue' ... Is it pro or con? 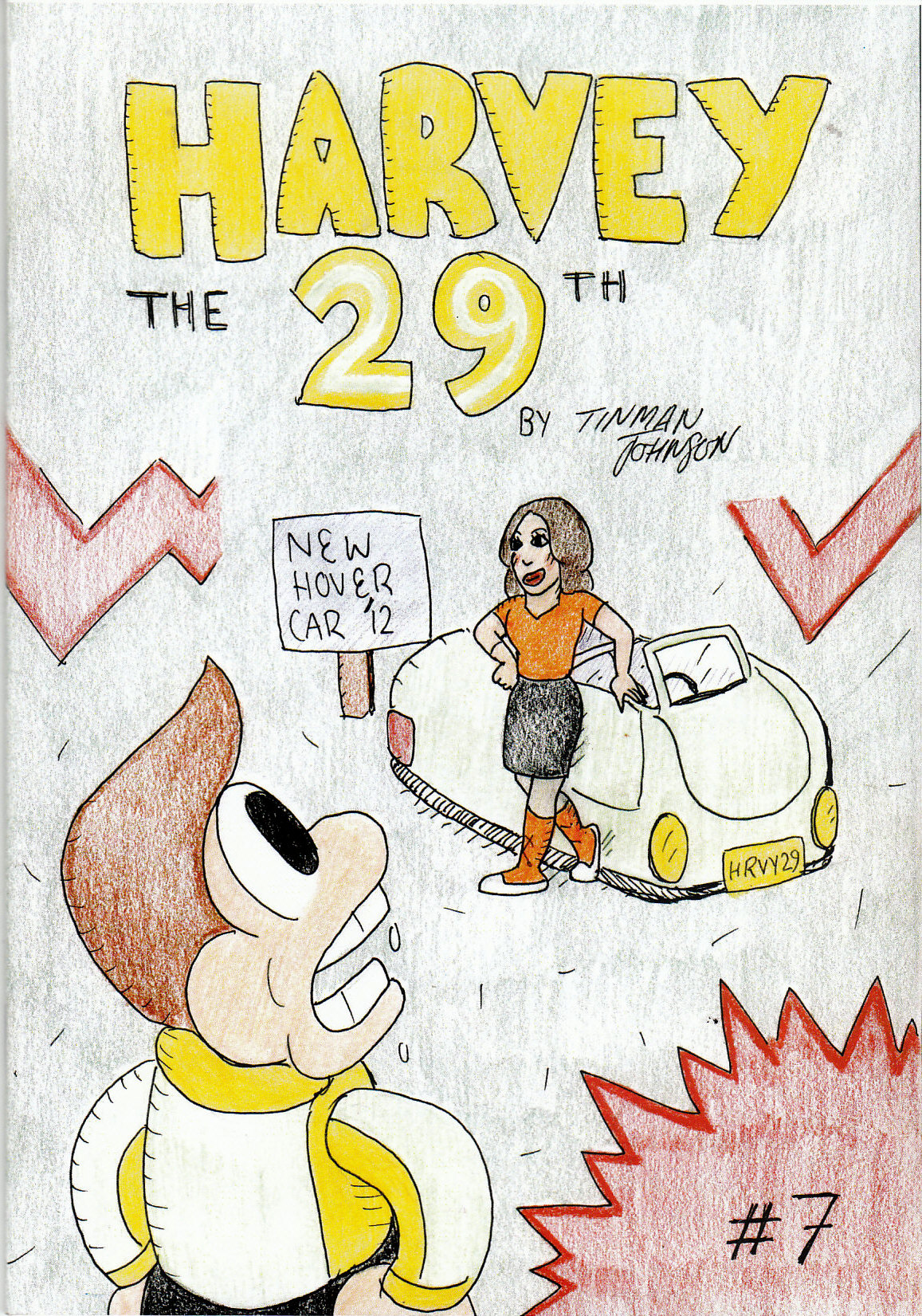 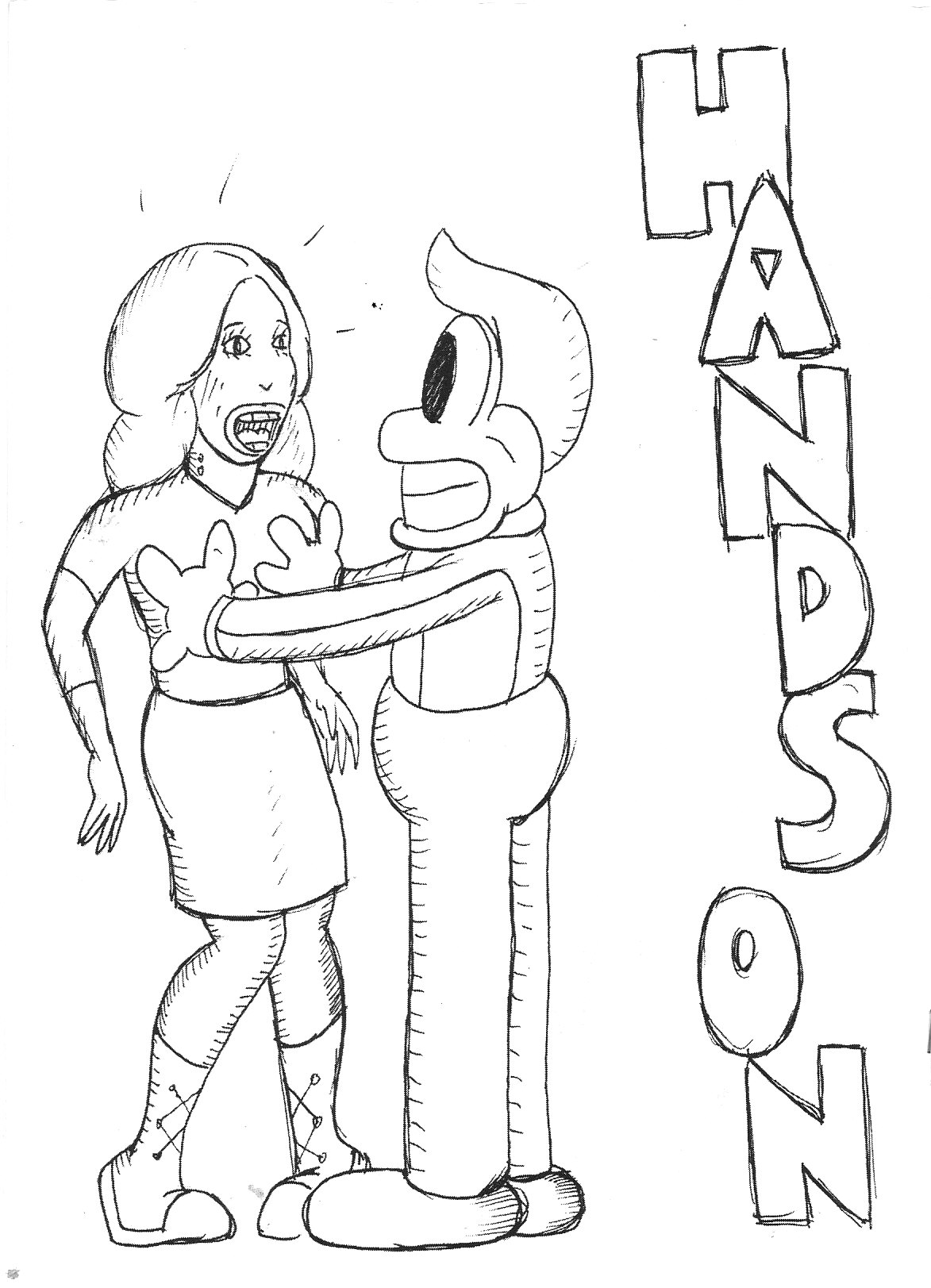 28 pages, digest, by Tinman Johnson, email for ordering info >>> harveythe29th [at] yahoo.com
Back in late 2010 shortly after the annual Newcastle zine fair (where I had a table next to Tinman's, and swapped comix with him) I reviewed Harvey #1-3. I met Tinman again recently, at this year's MCA zine fair (May 2012) and he gave me copies of Harvey #5, 6 & 7. Tinman's a real nice guy. If I could rate his comics on how nice a guy he was, I'd be writing a 23-page review glowing brighter than 23 million suns. However! I've read these latest installments carefully and optimistically, really hoping for some kind of big leap forward, or even sideways. And it's weird, because one second I'll think, "Well, maybe these would be good comics for kids!" then the next I see pages with a little girl who only eats other kids; or Harvey BBQing a frog; or Harvey urinating on a McDonald's sign (which may be cool and hilarious for us older folk, but a definite case of egregious sacrilege for the munchkin-headed junior burger Happy Meal addicts). But I'll tell you what, I really hope to turn up at some zine fair in a year or two and trade comics with Tinman and check out Harvey the 29th #10, or #15, because I'm sure something is gonna happen. Something BIG.
Until then however, Harvey The 29th will not be making my 'Top Ten Self-Published Comics 2012' list.
Collapse