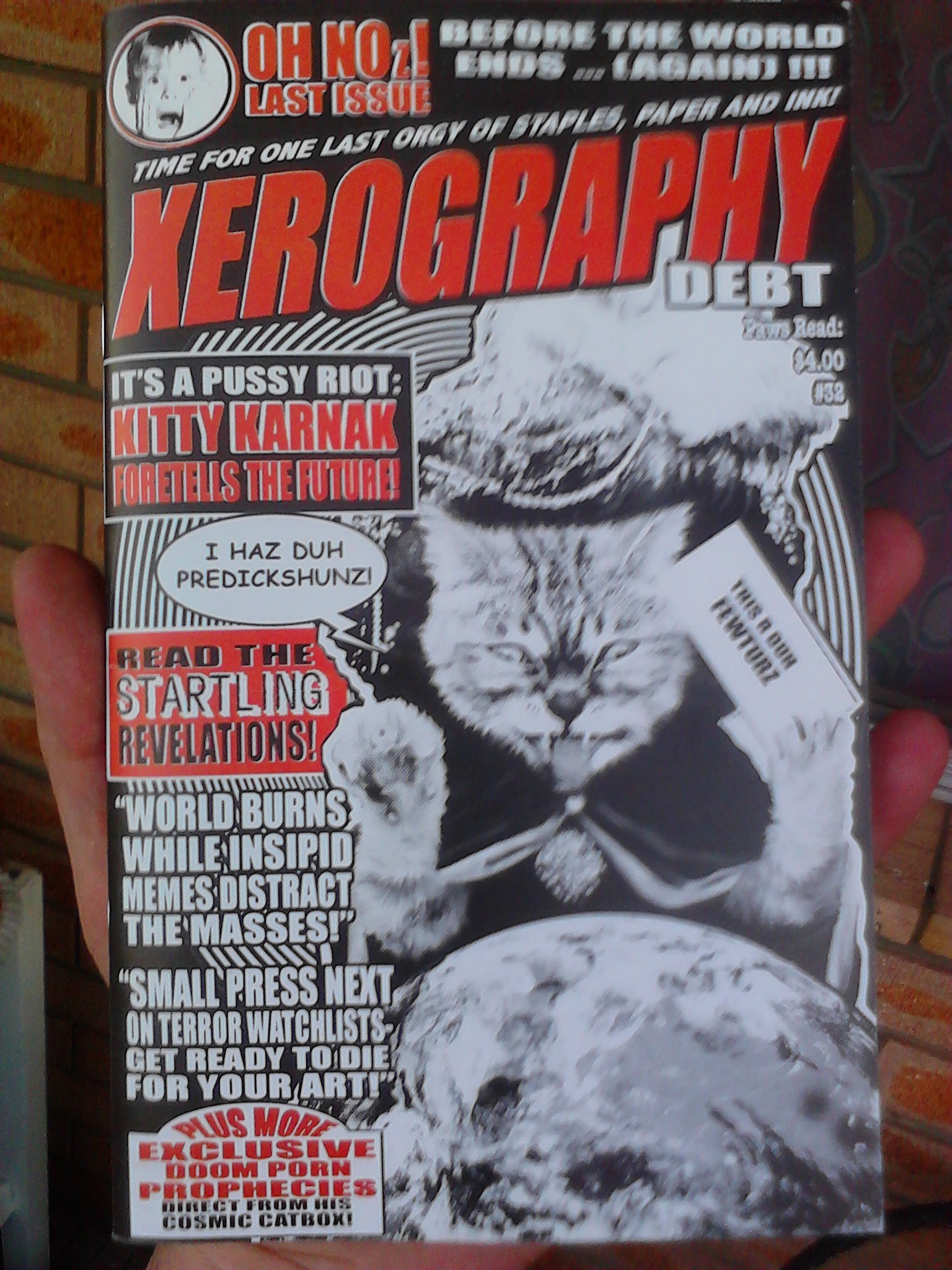 68 pages, digest, $4.00, edited by Davida Gypsy Breier >>> davida [at] leekinginc [dot] com + Davida Gypsy Breier, PO Box 11064, Baltimore MD 21212, USA
This issue kicks off with a terrific piece by Al Burian on music and politics. Inspired by and leading with the Russian Pussy Riot outrage, then covering Rage Against the Machine and Megadeth (Republican vice presidential nominee Paul Ryan's favourite bands), George Orwell's 1984 and Aldous Huxley's Brave New World, and Jello Biafra and his Oprah Winfrey appearance going head-to-head with Tipper Gore and her comically infamous Parents Music Resource Center (PMRC). Great stuff.
In another article, Jeff Somers writes about his decision last year to stop printing hard copies of his zine, The Inner Swine, and go digital only. His zine was chunky as hell but if you ask me, he could have cut it by half since half of each issue was his fiction stories, which were the weakest part. Sorry Jeff! Ha ha.
In his column, Kris Mininger writes about his disappearance from the world of zines. For one thing, he was MIA from the pages of this very zine last issue. Why? One of the reasons turns out to be the repercussions of a lukewarm review he wrote and the retaliation by that zinester in his (or her) own zine.
I always seem to forget that it's these columns, along with the multitude of zine reviews, that makes XD such a great read. And it's even more important now, after the other big zine review zine, Zine World, has bit the dust.
Order your copy from Microcosm!

P.S. Since the format of XD is such that each reviewer has his or her own section, you'll enjoy (or not) the reviews of each to varying degrees. But I gotta say, this time around those of Joe Biel really bugged me. In one review, he writes, "As an anthropologist...", then in the very next one, "...as a budding language theorist..." I expected the next review to include a sentence beginning with, "As a professional douchebag, ..." I mean, "budding language theorist"? The review after the next one includes the sentence, "She addresses the conflicting emotions she feels about an ex, who despite saving her life did not respect her needs and ultimately needed shed for her life." What the hell does that mean? ... To paraphrase the saying: writing is 1% inspiration and 99% perspiration. But with Joe, the formula seems to be 1% inspiration and 99% irritation. The latter experienced by the reader.
Collapse