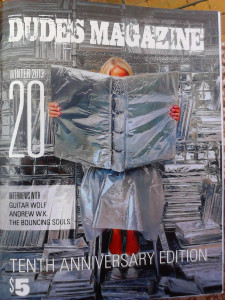 98 pages, magazine size, $5.00, Edited by Nighthawk >>> Dudes Magazine World Headquarters, 6819 Minnesota Ave, Saint Louis MO 63111, USA + www.dudes.mag.com + dudesmagazine [at] gmail [dot] com
Congrabulations are in order for Nighthawk and the rest of the Dudes for getting to issue 20, and 10 years in the publishing biz. Great job!
Same as usual, this issue is packed with good stuff.
'Moc Talk', a roundtable discussion on moccasins sounds like a Dr Seuss book. "Is it possible to rock your mocs with an undocked frock?" I didn't understand it, but it was funny. Do they really wear moccasins? Wouldn't that be like an Aussie wearing 'boat shoes' with his collar popped? Ha ha. I'm out of my depth...
In 'KITB: Indiana Via Virginia', Doug Sea reports on the uniquely crazy women of Indiana. Like Holly. She's got a kid called Billy. "...I find out that she used to live in NY, and that her kid's father is a deadbeat rapper from the Bronx. Wow. And I always thought Bronx rappers were excellent father figures." Later, talking about music, Pantera comes up. ""I used to play Pantera to my son while he was in my womb," she says. Damn I'd heard people doing this with Mozart, but Pantera? I found myself even more attracted to her."
Dudes staffer DR.E.W. has been living in China for over two years, and in 'How To Be A Jiugui' [Jiugui means alcoholic but uses the Chinese characters for booze and ghost/monster.] he reports on Chinese booze. Most Chinese people refer to all types of booze as "wine". "By far the most popular "wine" here in Beijing is erguotou, a type of baijiu, or white booze. Its name roughly translates as two pot head, meaning it has been distilled twice. It is cheap as hell and 112 proof. It will get you wiped on the cheap. Erguotou tastes awful."
There are two big tour diaries back-to-back, written by Nighthawk. The first one from a Haddonfields tour he went on, working on the merch stall, the second one still with The Haddonfields, but as part of something called Awesome Fest. Must be a big travelling punk rock show. Lots of punky tunes, lots of drinking, lots of pissing. Sounds fun.
That's only the tip of the iceberg there. It just goes on and on. Talk about bang for your buck. Here it is.
Collapse