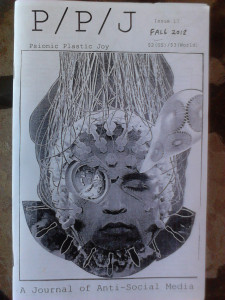 32 pages, $2.00 US / $3 World, Jason Rodgers, PO Box 62, Lawrence MA 01842, USA
Jason had some traumatic things happen in 2011, so this issue was done in January 2012, then circumstances and lack of resources delayed the release until he said enough, no more waiting, and published it in this digest format (rather than the usual large newsprint format, see my review of #16).

In his introduction Jason re-addresses his stance against technology after being attacked and ranted against by another zinester who refused to name him, referring to Jason only as a "conspiracy theorist". It seems to me that some people feel personally targeted for their use of technology after reading Jason's writings. An insecure reaction. I use the internet and various other 'new tech'. Everybody uses technology to various degrees. In this day and age, you have one extreme: the Neo-Luddite, who refuses all technology (I can't imagine living this way at all, I'll admit); to the other extreme: the rabid 'early adopter', those tech junkies who line up outside Apple stores for days waiting for the new version of iPhone or iPad. ... Anyway, while I don't agree completely with Jason's views on technology (I mean, where do you draw the line? Why not go back to hammer and chisel and clay tablets, eh? Ha ha!), it's obvious to me that some of these can be seen as a dumbing down. Example: I work in a museum and part of my job is to deal with visitor comments. Back in the day there were only hand-written comments on paper forms. Now many of them are tweets, and most of these read as written by some dumbass bag of rocks; no vowels, simple to the point of inanity, eg. "This exhibition rulz!!1!" or "This exhibition suxx!1!!" On the other hand, if we're talking about Tweeting, there's Stephen Fry, not only an embracer of new technologies like Twitter but one of the smartest and wittiest men alive. So, I guess while I value views like Jason's, I'm more in the middle of this whole technology thing, seeing the extremes in a similar way as I see extreme left-wing and right-wing politics - both as flawed as the other.

To continue the anti-Modern World theme is Sid Clark's piece, Rocks In Our Head', whose main argument is that the Modern World is very anti-life. It's targeted at those who resent being trapped in a world of dead things.

Next up is Jim Hayes's Neo-Neoist tenets, one of which is "Neo-Neoists must destroy the last 25 years of diaries, letters, blogs, collages, paintings, recordings, and photos; remember: it all sucked." Haw! I have a feeling some poor sonofabitch is gonna take this advice to heart, follow it, and at some later point experience some deep, deep regrets. On the other hand, this could be great if, creatively, you have been frozen at the bottom of the lake for the last 25 years, in which case this action could do the trick to rekindle that fire!

A long piece in here, 'Psychic Nomadism' by Jason Rodgers, made my damn brain short-circuit just with its opening two sentences: "I intend to become a psychic nomad, advancing theory and praxis as mobile actions. The sterilization, commodification, and repackaging of radical concepts as lifestyle brand accessories is inevitable." Okay, look. I think that if you dig Dada, Fluxus, Neo-Neoism and stuff like that, you'd probably dig this. For sure. Heh heh! ...  I am out of my fucking depth.

There are a bunch of other contributors in here: Yves Albrechts, Reed Altemus, Haddock, PJM, Thompson, Neal Wilgus, Stuart Stratu ... Those are the folks I know, or at least whose stuff I've seen before that made an impression. There's also stuff from Darlene Altschul, John Bennett, Len Bracken, Lady V, Apio Ludd, Malok, Francois Marceau, Bob McGlynn, Simon Morris, Riddle Management, Lena Samol, Jack Saunders, J M Ward, and John Zerzan, and there's contact info for most of them. Real physical addresses! No stupid emails or URLs or hashtags!