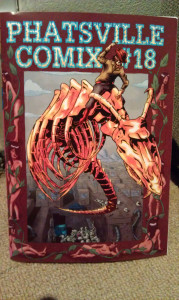 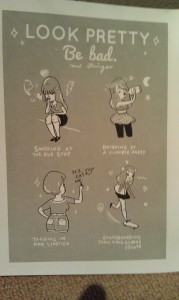 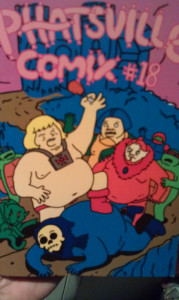 Slim pickin's this time around, sad to say. There's some good stuff but, man, you really gotta slog through a lot of lame comics to get to it. Mel Stringer always comes through with the goods. Giles and J-Man's 'Spam' strip was funny. On the other hand, a six-page strip featuring 'Haggard the Horrendous' was a dud. Even worse, the eleven-page (!) karaoke strip was lame squared. Giles and J-Stew's editorial powers at an all-time low, letting that one in. Shortly after that however, Shaun Craike appears to lift the tone - or really, lower it but in a good way - with some perverted Mickey Mouse-eared beer-gutted bogan. What the hell is he fucking though?
... Some more lame crapola, then a welcome page of one-panel gags by Ross Radiation, and a strip by Ryan Vella. Then more forgettable fluff, before the reader's despair is briefly put on hold by another page of RR's gags. But really, what the fuck is going on here? I'll tell you what. Giles and J-Stew ran everything when they should have cut half of it. Did they reject anything at all? And if so, could it have been any worse than some of the shitty McShit they did include? ... But to end on a positive note: The alternate cover is really cool, reminding me of Mike Diana. But who did it? Don't ask me. Ask the Phatsfolk, those mofos who got something against contents pages.

[Anybody up for a second opinion review of this one? Just say the word and I'll send it to ya.]
Collapse