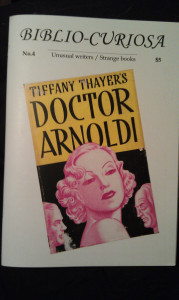 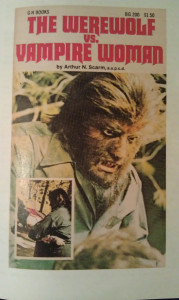 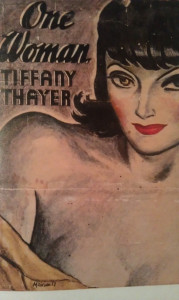 44 pages, digest size, $5.00, Chris Mikul, PO Box K546, Haymarket NSW 1240, AUSTRALIA + cathob [at] zip [dot] com [dot] au
Hurrah! Another chunky serving of "Unusual writers and strange books" Chris has unearthed, beginning with The Werewolf vs. Vampire Woman by Arthur N. Scarm [1972], a "..little gem of exhilarating awfulness." Ostensibly a novelisation of a 1970 monster movie, it in fact bears only the most passing resemblance to the film, taking off on innumerable tangents of its own, and brimming with cartoonish sex and violence, ludicrous dialogue and scenes that border on the surreal. Example:

Waldo had no intention of harming Ruth. She was too gorgeous for that. In one yank he pulled off her silk blouse and lace bra and left her standing defenceless against any young child who might come along wanting his lunch.

The last part of this review is Chris's investigation into who was Arthur N. Scarm [???...]

Next up, the real feature presentation of the issue (at 22-pages!) is The Sardonic World of Tiffany Thayer, Tiffany Thayer... okay I have to say it, I first thought this must be a woman, but no, he, Tiffany Thayer, "was a self-styled anarchist, contrarian and atheist..." who is mainly known for his link to Charles Fort, since he was the one who founded the Fortean Society in 1931. But holy Mother of Founders this founder had another world [other worlds] going on of his own bizarre creation, one of the most noteworthy being, in Chris's words, "one of the most grotesque and repulsive works of science fiction ever written," his novel Doctor Arnoldi [1934].

This extensive overview of Thayer's works includes reproductions of rare book covers, even a press photo of Thayer and his wife (Tanagra the dancer!) on a boat returning to New York from France, acquired by Chris. He really goes above and beyond. There's also a Bibliography and list of Sources, so if you're intrigued, don't stop at Googling Thayer, get this zine.

Next up is the fascinating The Mysteries of Mark Hansom by John Pelan. Apparently, Mark Hansom wrote supernatural thrillers of such quality they appeared on the 'Thirty-Nine Best Horror Novels of All Time' list of legendary author/editor Karl Edward Wagner. It was Hansom's first novel, The Shadow on the House that made this list. We learn that "Mark Hansom" was a pseudonym. Nobody knows the real name of the author. This mysterious author's subsequent novels are reviewed. I really love this part [about Master of Souls [1937]]: "The theme of a timeless romance spanning centuries has been used many, many  times before, but Hansom stands it on its head by having this particular romance be between two of the most singularly repellent characters in fiction."