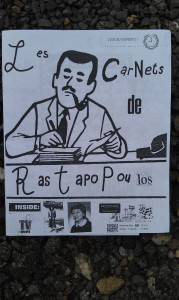 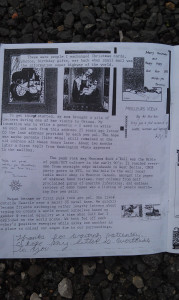 16 pages, 8.5 x 7", the usual, trades OK, Les Carnets de Rastapopoulos, 2-7 Larch Street, Ottawa, Ontario, CANADA KIR 6W4
In a note that came with his zine, Rob explains that his last issue [#8] documented his penpal activities back in the early '80s - his attempt to land an Eastern European penpal. The two countries he targeted, Czechoslovakia and Slovakia, being Communist in the Cold War era, only published one magazine aimed at teenagers, so all those kids saw his ad and thus Rob ended up receiving 500+ requests to be their penpal. This issue continues with his quest 25 years later to attempt to reconnect with some of those penpals. He was hoping that, like himself, some of these people still had parents at the same address who would pass his letter on. This worked, but the first response was quite sad, being from the mother of his old penpal, Meagan, who reported that Meagan had passed away years ago, and asked him to phone her for more details.

This zine is so great and wonderful, for me partly because I'm from the same generation and similarly had penpals in the '80s, so well know that enormous buzz you get when a letter arrives. Of course, Rob has taken it to another level. Writing to Cold War kids, receiving hundreds of letters, and now 25 years later undertaking a quest to reconnect with those penpals. Am I repeating myself? I think so, but excuse me because I am so excited and mind-boggled by this zine.

Even if some ziner out there is kind of jaded and in a rut with zines, this one just might be the spark to reignite that passion and enthusiasm. It is so great.
Collapse