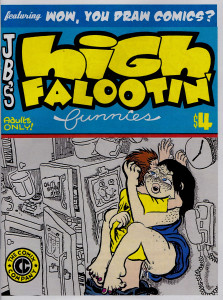 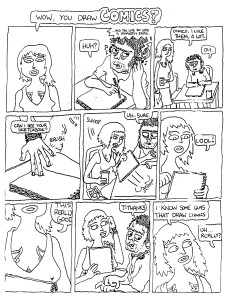 The feature of this one is a 26-page strip, 'Wow, You Draw Comics?' It begins normal enough. A guy is in a coffee shop drawing comics when a girl walks up to him and starts chatting. She really likes comics! The guy can't believe it. I mean, this never happens in real life. Before you know it, the girl invites him back to her place where her flatmates also draw comics. At this point I was sure this was gonna end up a really bad idea, and I wasn't wrong. Back at the girl's place, two guys appear and they soon drug their visitor, then rape and torment him in various other ways. One of the most twisted aspects of this scenario, however, is that while this is happening, the two guys come across like professional comics editors. It's very strange and sinister, and even funny (in a pitch black sense).

There are a few short strips at the end of the book. One of them has a robot being released from robot prison. [JB has got this really great and unique thing going on with robots - see my review of his recent Gladhand Comix #1.]  Another one-pager, 'Fuck Me!', has JB (?) walking down a street, torturing himself over autobiographical comix. The final 3-page strip, 'He Got No Chopz', presents the nightmarish (for a comics artist at least) scenario of JB at his drawing table being verbally abused and ridiculed by two of his own characters, one of whom is Dev-12 from the previously mentioned Gladhand Comix. Yikes!

Wow, JB seems to be quite prolific right now (no doubt thanks in part to Dexter Cockburn and his The Comix Company). Good for us!
Collapse