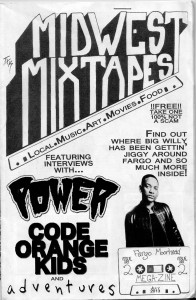 Put together by a group of friends in the Fargo-Moorhead area, Midwest Mixtapes is mainly a music zine with album reviews and band interviews, but also a few movie reviews, root beer reviews, a restaurant review, a local photographer interview, a video game review (Super Meat Boy), and sightings of Will Smith in the Fargo-Moorhead area. ... I've really gone crazy underlining and making notes in this issue so I'll go straight to all that... PxM interviews Evan and Dan from hardcore band, Power, and Evan says this about another hardcore band called Wreck: "They're doing real, like, obscure riffs and stuff that isn't jammy, but it's real technical. Some kids just might not get it." Then when PxM asked them about how their tour has been, Evan says, "Canada was awesome, they hook it up super hard. If you can ever go there, go there." ... Then a little bit later, PxM begins a sentence with, "I'm not going to lie..." which I really should report to Dudes Magazine's Pancake Master [see review]. I really enjoyed this interview I guess mainly for the language. Hook it up super hard? I've never heard that before but I like it. I'm gonna use it. ... The centre pages is a double spread of Will Smith sighted around town. It's just a cardboard Will Smith propped against things. Very funny. There are also comments alongside each one by Big Willy, a little anecdote about each shot. MM describe him this way: "Will Smith is the last healthy human alive on the planet, hiding from the infected hipsters of the downtown area..." ... The other pages I underlined mad style was an interview with Midwest [Iowa] singer-songwriter Andrew Johnathan, which is unintentionally funny, "Not only do you fall in love with his lyrically genius abilities and his melodic guitar, now along comes banging drums, soulful electric guitar, and rhythmic bass." This kind of writing seems out of place. But it's funny! Another funny aspect of this interview is that twice Johnathan begins a sentence with, "I can openly say..." I wanted him to throw in a few "I'm not gonna lie..." Finally, when asked about his favourite part of touring, Johnathan admits, "I get to go a lot of places I haven't been, along with a lot of places I have been..."

Anyway, this one was a thoroughly enjoyable zine. Jake from MM also sent me MM#3 so I'll write about that one next...
Collapse