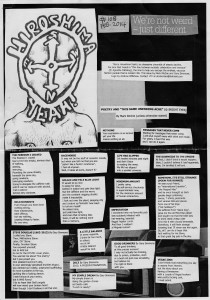 A MEGA BIG thanks to Kapreles for recommending this zine.

I'm afraid this is another 'Somewhat Late To The Party, Fuckity-Fuck It! Dept.' deal, but as a wise frog once said, better late than never!

What we have here is two or three pages stapled in the corner, issued every month by Mark Ritchie and Gary Simmons from Scotland. It employs a nice small font so even though it's only four pages, it's really jammed with content, and that content is rich. I mean it's RICH.

You may not believe it when I reveal the following - this zine has poetry that does not suck ass. However! Read them and you will find it so. Really good poetry here! Example:

Minimum Amount
I prefer using
the self-service checkouts
in supermarkets now,
for the minimum amount
of human interaction.

In recent issues Gary has been contributing a column from prison, '1.5 Years Behind Bars' which is extremely interesting, not only for the fact that it was Gary's first time in the slammer and when he went in he was 52.

Mark writes really enjoyable-to-read album reviews [rare] spiced up with info like where he bought the album, and for how much, like one was in the bargain bin; another was given to him at a gig by a friend... He also writes about gigs he attends, and these include the whole night, from leaving home, stopping for a bite to eat and drink before the gig, and how much each pint cost at each place.

There are also book reviews and short fiction.

HY! is so great! I must not miss any more issues!
Collapse