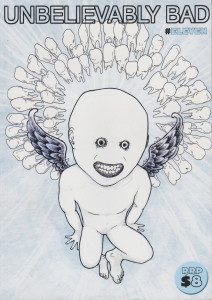 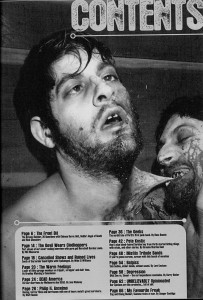 Goddamn it was so GREAT to find out recently that not only was there a new issue of Unbelievably Bad out, but two new issues since the last one I read, which was UB9. [I was gonna link to it, but I now see that I didn't even post a review here. For shame! I'm an asshole - if you needed further proof, there's Proof #1,000,023... But here's my review of UB8...]

Loads of good stuff in this issue, like an interview with Chinese Burns Unit [retard metal art wizard Glenno Smith's current band]; Five Gross Metal Covers (including Carcass's exquisitely goretastic 'Reek of Putrefaction']; Part 11 of UB's Never-Ending Interview with the Wizard of Gore, Herschell Gordon Lewis; a piece about life in a travelling band by Mike IX Williams of EyeHateGod; interview with Sydney band The Warm Feelings (which contains a really great and funny LSD-taking anecdote); a really really great tour diary by Dead USA. I underlined and circled a bunch of parts of this, one of them is this, about band Norska: "I hope they make it to Australia sometime, they have that low-end punish vibe that makes tubby blokes in black T-shirts salivate." ... There is loads more in here, including an interview with Philip Hansen Anselmo, who I understand is and has been rather influential in the 'heavy music scene'. So, by now you should know if you need this or not. If you're still reading you probably do, comrade.

This zine also includes easily the most disturbing band photo I've ever seen. It gives me the CREEPS, man. Behold! Wait! Cover your eyes! >>> 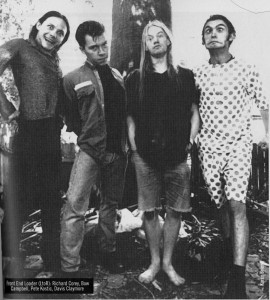