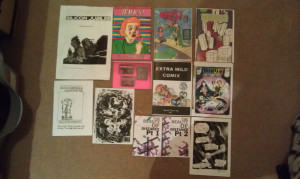 [Above] These are the comix and zines I scored today [reviews forthcoming]. 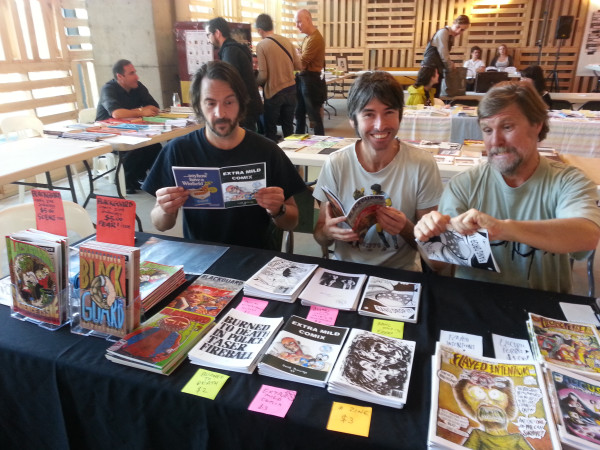 I got off the bus near Broadway Shopping Centre and went to Oporto for a bacon & egg muffin and coffee. Outside, I tried to light a cigarette but my stupid lighter was outta gas. Still I spent five minutes trying to get it to light, rubbing my fingertips raw. "Sonofabitch! You're gonna work, motherfucker!" But it didn't, so I stomped around the corner to the convenience store for a new lighter. ... I walked down Broadway and arrived at 28 Central, got there at 10:30, went up to level three and tried to find our table, bumped into David Puckeridge and Gerard Ashworth, who had arrived a split second before me and had acquired programs and thus knew where our table was. Table #27. We set up, with my trademark black sheet tablecloth and, finally, two of those perspex booklet holders. Total pro set-up, after all these years. [I get around to things...] Chris Mikul rolled up about half an hour later. He had slept in, totally forgot about the zine fair until he woke up at 9:30. "Fuck! The zine fair! It's today!" Lucky he just lives around the corner and down the street a ways. He set up his table close by to ours; his groaning under the weight of Bizarrisms, Biblio Curiosas, and Eccentropedias and other books. ... As usual people came up and tormented us by flipping through our comix and zines and just when we were sure they were hooked, they dropped 'em and walked away. Still, we sold a bunch. For an arguably not-so-well advertised zine fair that was going up against the big MCA Zine Fair, on the same day, Other Worlds was Going Off. Many many people surging through, jamming comix and zines up to their nostrils and snorting hard, eyeballs rolling in ecstasy. ... Some real nice folks came up to say hello, namely Drew Gates and his girlfriend [Apology! I forgot your name! *saves honour by committing seppuku*], Tinman Johnson [Harvey the 29th], and Julie and Bize. The venue [28 Central] was amazing. It's got creeping vines covering the front of it, and this is a 40-storey building. Most of the building is residential; the bottom part [four levels] is shops and a gym and the room where the zine fair was. It's a big room with high ceilings, exposed, so you can see the pipes and wires. ... David's missus May really looked after us - she made mini muffins for us to give to customers, and sandwiches for us. They were tomato, cheese, cucumber, rocket and hommus sandwiches and they were fucking DELICIOUS. Thanks May! It was funny with the mini muffins, we joked that if somebody accepted one, that meant they were obliged to buy one of our comix. Haw! But every time somebody came up and we said, "Have a muffin!" they shook their heads and made excuses, as though they were certain it was bait, and they sure as shit were not gonna fall for it. ... The zine fair ended at 4:00 so we packed up and walked up to the Broadway Hotel for well-earned coldies. I even had a pizza. A Voodoo, with cabanosi, jalapenos and salami. Then I had to split to return home in time to give Summer her insulin shot. But Jojo had done it all by herself! *Blub!*
Collapse