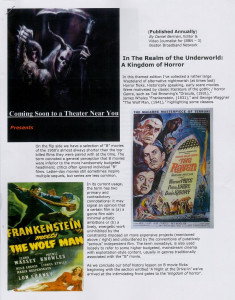 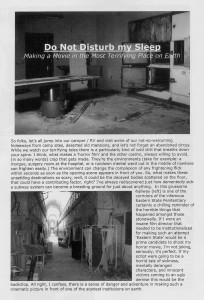 This is the third issue Daniel has sent me, but I haven't reviewed them before because they completely short-circuited my brain. This time Daniel emailed me and informed me that he was sending his new issue in a Priority Envelope and it should arrive in 6-10 business days. [It also said "For review" on the front.] Well, it arrived today! So I'm going to review it! ...The other two issues seemed to be a collection of articles Daniel found on the internet, but this time he wrote most of it (except for a piece by Skip Williamson - 'The Birth of Underground Comics'). There's no denying his passion for horror and B-movies, in fact he strongly urges: "Let's trigger our inner devil and conjure up a wealth of sinister ideas for all you filmgoers out there who want to be spooked or rattled." Printed on nice glossy paper with many colour images of movie posters and stills, the very unusual and unorthodox sentence structures certainly jolt the reader, at least this reader. In one short piece, Do Not Disturb My Sleep [subtitled Making a Movie in the Most Terrifying Place on Earth] we are bewitched by this arrangement of words:

I think, what makes a "horror film" and the other cosmic, always willing to avoid, (in so many words) crap that gets made. They're the environments (take for example: a morgue, surgery room at the hospital, or a rundown mental ward out in the middle of nowhere can frighten easily.) The environment can change the complexion of any frightening flick within seconds as soon as the opening scene appears in front of you. So, what makes these unsettling destinations so scary, well, it could be the decayed bodies scattered on the floor, that could have a contributing factor, right? [That could account for it, all right! - Stratu]

Many pages include lists of movies, like one page with the title: 'Intended For Mature Audiences Presents Nightmare Worlds'. The short paragraph ends with this warning:

In one gigantic disturbing moment I'm presenting several worlds of haunting tales that are no laughing matter to say the least.

There follows a list of 26 movies, including Atomic Rulers of the World; Evil Brain From Outer Space; and Robot Pilot.

This issue ends with a full page 'Bio-Paragraph about Worldly Film Productions Founder and Editor of At The Movies Daniel Berman'. In a sub-heading titled 'Writing Background' we learn that "Daniel Berman is an up and coming writer for many notable web venues he contributes film reviews to such websites."

An extremely strange and unusual zine. 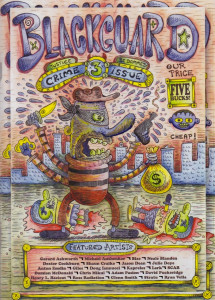 To my Great Horror I just realised I neglected to post this review of Blackguard 3 [the CRIME issue] from Optical Sloth:

The crime issue! If you’ve read past issues of this anthology and think that this is a subject that this crew could handle very well, you were absolutely correct. My only complaint is that almost the first half of the book is dedicated to a letters page and comics and zine reviews. Not that I hate such things, but sometimes it gets in the way of the actual comics, and I’m speaking from my own personal and cranky bias about getting zines and comics all jumbled up. As for the comics themselves, it’s hard not to find plenty to love. When things start off with a color strip about Nazi superzombie monkey sleeper agents (by Ryan Vella), you know you’re reading a book with tons of potential. Well I do anyway, it’s entirely possible that such a thing would turn you off immediately, in which case I’d recommend leaving this review now. It’s OK, there are plenty of other comics to read about on this site and not a single one of them has a Nazi superzombie monkey sleeper agent to bother you. Strips include an actual serial killer and the Hamburglar discussing royalties (by “Glenno,” which may or may not refer to Glenn Smith), Adam Pasion (or his story stand-in) lighting an empty pool on fire as kids, Stratu with a brother killing his sister after a stupid argument, scribbling a penis on a “Walk” sign (by Bize), Chris Mikul with the profoundly strange story of Kenneth Neu, Shaun Craike with his crisis of conscience after his only attempted theft, Neale Blanden with the story of the property theft of Mickey Mouse, Anton Emdin with the angriest man on earth and Dexter Cockburn (with one of the few stories of his without visible sexual organs) with the story of the murder of a young girl and the enigmatic diary entry detailing the deed. There are also two text pieces by Damian McDonald and Henry L. Racicot, both of which are well worth reading. As I already gave away in the intro, this comic is well worth picking up. I only mentioned about half of the stories to leave you with a lot of surprises, and even if you think that comic and zine reviews are wasted space (and, even though I pointed them out, I did notice a few comics I should probably check out, making me a bit of a moron for even mentioning that in a negative light) there are still more than enough comics here to make this worth the $5.
Collapse