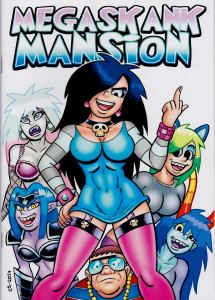 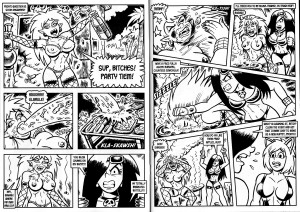 [Megathanks to Shaun Craike for sending me this comic by one of his DeviantArt friends. Shaun even included a copy of the BABYMETAL CD album, which turns out to be the ideal soundtrack for MM! Thanks Shaun!]

"Welcome to Megaskank Manor! Home of the total spoiled brat and necromantic sorceress, Foxxxy! Not to mention her entourage of fangirl sockpuppets and zombie slaves!" With this introduction/warning we're blasted right into the midst of violent, sexy and foul-mouthed Foxxy and her pals. [The snappy trash talk could have been written by Ryan Vella.] Those who are easily offended are well-catered for, with every second panel at least. ... The art is great, and here and there strikingly reminiscent of local comix hotshots Anton Emdin and RossTesoriero. And am I imagining it or is Archie Comics a big influence on Sibling's drawings of girls? ... J Pop Culture fans will dig this too. Example: One of Foxxxy's fangirl pals is Dungarella : Hardliner Weeaboo. I couldn't describe this phenomenon better than Urban Dictionary has:

"Weeaboo: Someone who is obsessed with Japan/Japanese Culture/Anime, etc. and attempts to act as if they were Japanese, even though they're far from it. They use Japanese words but usually end up pronouncing them wrong and sounding like total assholes."
Megaskank Mansion is funny and deranged in the most perfect way. Highly recommended!
Collapse