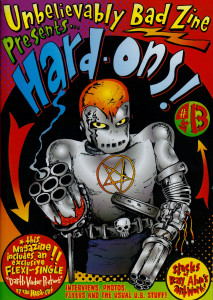 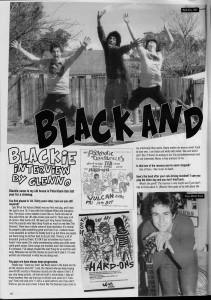 I've noticed something getting mentioned and discussed more often lately, and that is artists and musicians and other creative types and the fact that more often than not, they must support themselves by means other than playing in bands, or drawing comics or writing novels. A few weeks ago I read an interview with two guys from metal band Neurosis, and one of them [Steve Von Till] admitted that his 'day job' was a primary school teacher. Then a week later I read that a new music blog had launched - this blog (as I understood it... I need to go back and find out more about it...) focusses on what band members do outside their band lives, to make a living.

What the hell has all this got to do with the UB Hard Ons special that you're supposed to be reviewing, ya knob head? I hear you ask. Well, it is the fact that Hard Ons guitarist Blackie is also a taxi driver and back in May 2012 he was smashed in the back of the head with a skateboard by a 14-year-old girl while Blackie was attempting to subdue her 16-year-old boyfriend.

A novel I read recently contained a scene that took place between a forensic pathologist and a detective over the corpse of a man who died from head injuries. The pathologist explains that hits to the front and side and top of the head are one thing, but a hit to the back of the head, being closest to the cerebellum, is the most dangerous part of the skull when it comes to blunt trauma. So Blackie is very lucky to have survived, and to have recovered to the stage where he returned to playing guitar with The Hard Ons.

Back to the zine... There are multiple interviews with Blackie, Ray and Keish [and the 'new guys' Pete Kostic and Murray Ruse] conducted tag-team style by UB's Matt Reekie and Glenno; tons of Hard Ons flyer art; and an exclusive flexi-single ['Darth Vader Pretends']

This publication is so great. Hard Ons are a Sydney institution. Punk Rock Metal Legends.

If Von Helle hasn't already sent copies to the National Library of Australia and State Library of NSW for Legal Deposit, well here's a reminder.
Collapse