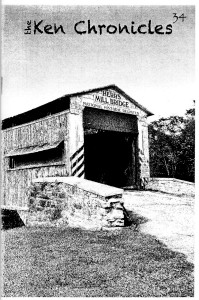 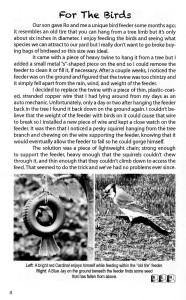 To my horror, I realised that the last issue of tKC I reviewed was #23 back in August 2012. This shameful oversight shall be rectified at once, with Ken's brand new issue that arrived in my mailbox a few days ago.

If you've never heard of The Ken Chronicles, it's easy to sum up: Ken's a retired auto engineer who started his own perzine in order to write about his life, travels, opinions and philosophy. He publishes a new issue four times a year, like clockwork. He's built up his zine to the point where he's now got a decent-sized letter column, which opens each issue, and that's followed by - to use this issue as a perfect example - an article about a retro car show he attended; his bird feeder mystery [how did it keep ending up on the ground with only little, featherweight birds on it?]; what he likes most about retirement; my favourite section 'What I've Been _______ Lately' in which he writes about music, books, movies and zines he's enjoyed [or not] since the last issue; a trip he took with his wife and a coupla other couples to the Amish country; and finally 'Updates, Oddities & Random Thoughts' - musings on life, and what you would change if you had yours to live over again; scoring free envelopes; why Ken doesn't write about politics and current affairs; what happened to his parents' ashes; and an oven malfunction.

In a similar way that Harvey Pekar's American Splendor comics are a celebration of everyday life, so too is Ken's Chronicles. I'd also recommend reading one of these as a tonic to this often ludicrously fast-paced and technology-dominated modern life.
Collapse