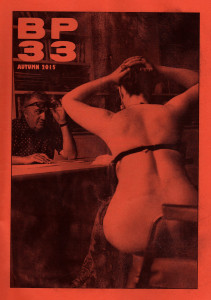 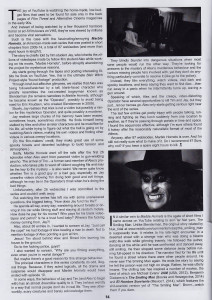 It's been three years since the last issue of BP. Three years! That's a long time in anybody's language. "Tre ar" if you're Swedish.

But what a return. There's so much good, nay, great! stuff packed into this issue it's hard to know where to start. But it seems smart to begin with the interview with Aussie pub rockers The Vee Bees. I've never seen them, an oversight which will be rectified as soon as possible after reading Dann's interview. These guys are funny! In response to Dann noting that they wear thongs onstage, Vee Bee Glenno admits "they just look so good" and they even wrote a song called '3 Thongs' "because that's the ultimate - wearing three of 'em" to which Vee Bee Norro adds: "If you're gonna wear three thongs, make sure you're sober when you get dressed, but. I once got dressed for a show a little bit tipsy and I got me things mixed up. I ended up with a G-banger on me foot and a double plugger in me crack."

Also in this issue: why Dann attended two Hard Ons gigs twice in the same month; the life and death of terrifying old-school pro wrestler Bruiser Brody; Dann's belated discovery and obsession with Elliott Smith [1969-2003]; movies viewed on YouTube [e.g. Liquid Sky [1982]; the story of the chilling Smiling Man and a few films inspired by it; a review of The Swimmer [1968] that Dann tracked down after reading about it in The Kobb Log #5 and which instantly shot into Dann's Top Ten Greatest Movies [Note: and thanks to Dann's review I tracked this movie down too and will watch it this Easter Long Weekend!]; UK TV celebrity Simon Dee whose short-lived career was thanks to his "arrogance, stupidity and refusal to admit that his 15 minutes of fame was over"; and more!

Betty Paginated is undoubtedly a love-it-or-hate-it zine, but I love it, and I'm not alone! ... Or not too alone, ha ha! ... So I strongly recommend it, to those of you with similar tastes, you lucky devils!
Collapse