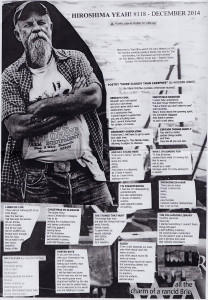 My favourite line from this issue is from contributor Simon Morris's 'Five Depressing English Seaside Towns':

"[4] Saltburn-by-the-Sea - Best approached by train past the most startling ugly slagheaps the NE can offer, the wind from the North Sea is especially bracing in winter from the top of the cliff you'll want to throw yourself off." 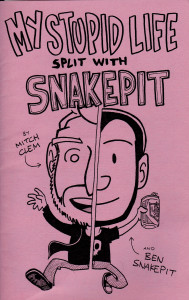 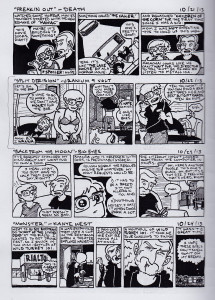 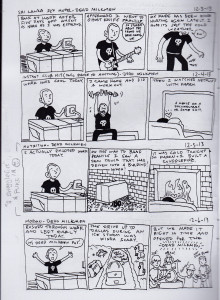 Sid Clark very kindly sent me this, and in his note he mentioned that he liked Mitch's stuff more than Ben's. "Well!" thought I, "That may be, but I will be the judge of that!"

Turned out I agreed with Sid.

I read Mitch's half first. ... But wait a minute! How about some background...

Ben had been hassling Mitch for ages to do a split diary comic with him and finally Mitch ran out of excuses and they did it. To begin with, it was only supposed to go for a month, but somehow it got extended to three months. And there's a very funny part in Mitch's half where he admits "This split is killing me!" and that he's already two weeks behind. Then Ben comes by and says, "This split is going so well, why don't we extend it to the end of December?" to which Mitch reluctantly agrees.

Anyway, I read Mitch's half first and it was very good. But then Ben's half was a big fat disappointment. He himself admits at the beginning that Mitch "draws way better than I do" but that's not the reason. Before the end of Ben's half, I felt I already knew the 'formula' - Ben goes to work, it's either "chill' or "sucks"; Ben works out, only to later "undo" any benefit by pigging out on fried chicken (or cookies); at night Ben and his girlfriend Karen snuggle on the lounge and watch Star Trek, or a movie [these 'schmoopy' parts really got nauseating by the end, especially the one where Ben notes, "It was cold tonight, so Karen and I built a snugglefire."]

Mitch may draw better than Ben, but his diary comics are far richer, content-wise. As an example, it took me about a quarter the time to read Ben's half than it did to read Mitch's. There's just so much more writing, and density, to Mitch's stuff.

However! Mitch doesn't get away scot free! That bastard is guilty of one of my pet peeves - beginning sentences with "So ..." Just one example here: "So last night we saw American Hustle." I wonder if anybody else is irritated by this? Probably not. Maybe I just need to get the fuck over it. Haw!
Collapse