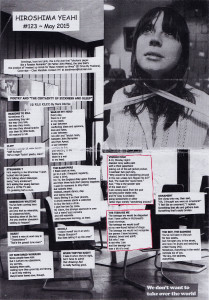 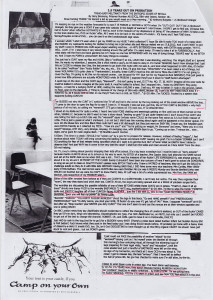 Gary's life-in-prison series is about to wind up - this issue's instalment we find Gary with a mere seven days to get through until he's let out of the cage like a little bird, but it's not gonna be easy when there's a retarded douchebag calling him "wolfman" through the door of his cell. What's he gonna do? Smash the bloke? the twat deserves no less, no doubt about it, but smashing some prick who deserves it was what landed him in gaol in the first place. ... Mark's reviews are always a pleasure to read, and the one of The Eagles 'The Very Best Of' album was funny because the person who sent it to Mark probably thought he would - and hoped he would - do a "hatchet job" on it. However the plan backfired since Mark has always had a soft spot for the band. Which fact shortly leads to further admissions of "guilty pleasures". For example: "Oasis (but Liam is still a twat)" and 'Come Undone' by Robbie Williams, "(also a twat)". ... Among the reviews, Mark gave my diary comix the thumbs up! [Phew!] ... The other great piece in this issue is Simon Morris's 'Guide to Sex, Love and Relationships Part 2'.
Collapse