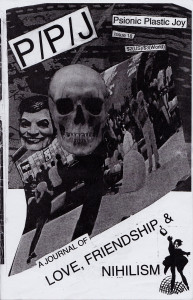 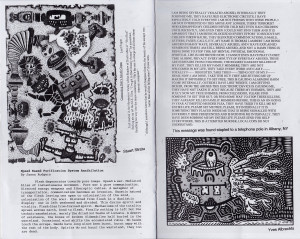 The first line in the new issue of P/P/J - following Jason's address - gives a good indication of the stance on technology: "Fuck e-mail. Write a letter." [Hear! Hear!] With this in mind, and as I got about a third of the way through the issue, I had this thought: "I'll bet that not even ONE of these contributors has ever waited in one of those lines for the latest Apple gadget on day-of-release."

Sad to note in his introduction that Jason suggests this may be his last zine. Things have become so grim that when he showed his missus the first two paragraphs, she asked him if it was his suicide note.

Leading off this issue is a terrific excerpt by Jim Hayes of his '120 Loop' art theory/project. He quite rightly declares that in these times, written correspondences are vaild art objects, and that "working on a blog is a perfectly acceptable activity for a contemporary artist to undertake."  I am also impressed with his analysis of collage art: "The construction of the collage resembles a restructuring of the rainbow images designed to entice and ultimately dominate. Society flashes pictures above the heads of the inmates. You can't have this; you want to be that; this image reminds you of a brief moment in time. The collage is the prisoners' only chance of self-expression."

Another amazing article is 'The Wipas Case : A True Story of Grisly Murder' by Dr. Oscar Sanchez. This explores the crimes of four brothers ("all-male"), and all of them homosexuals. Dr Sanchez writes in 'Spanglish', and even though the subject matter is serious and disturbing, this piece made me laugh loud and often. Observe the fate of the brothers' victims: "Once youth'd been coldly slaughtered, the Wipas chopped off completely the cadaver victims' nads ... then testicles were all emptied so Wipas could adroitly use this kevlarwise skin to make an interesting whole merchandise strip." A witness interviewee who assisted Sanchez in his investigation was Professor Salvador Mendoza, "Huatabampo museum janitor". The job market must be tough in Mexico if the best job a professor can get in a museum is its janitor. ... One final anomaly I will point out - Sanchez several times writes about the "cots" where the four homicidal, homosexual brothers spent their lives. There are even pictures of these "cots". They in fact appear to be small, boxy dwellings, so I suspect that the Doctor means "huts", or "cottages".

The other noteworthy contribution to P/P/J #18 almost certainly appears without the author's knowledge, since it is of a "message found stapled to a telephone pole in Albany, NY." Obviously written by somebody in the grip of schizophrenia, reading it you can check off one by one the most well-known symptoms of this awful affliction - for example paranoia, the belief that mysterious 'others' are controlling oneself, and have somehow inserted electronic devices inside your body, and terrible spelling.

From what I remember (or don't remember, to put it a better way) about the last issue of P/P/J, this one is a massive improvement. Really wonderful, this, and I recommend it wholeheartedly. [I just hope that it isn't really Jason's final zine!]
Collapse