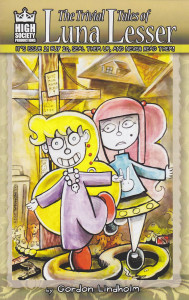 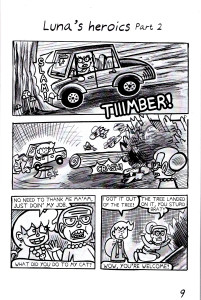 Shaun Craike sent me this comic to review. It's by one of his Deviant Art friends. Having just finished reading it, I have to say it's hardly 'deviant art'. It's tame! And lame.

First of all, it's standard comic book size, and I soon noticed the 'joke' on the cover below the title - "It's issue one! Buy 20, seal them up, and never read them!" On the one hand, that's good advice. If you don't read it, that means you can use the time to read something else. Just about anything you find laying around would be better, even something lying in the street. On the other hand, it's bad advice because if you did buy twenty copies, at some point beyond that you would be obliged to kill yourself when you realised what an idiotic thing you did.

What's inside,eh? What's it all about then? Well, Luna lives in Dystopia with her parents. She's got a friend called Maple and she's an idiot. Luna isn't an idiot, she's worse. You know of the 'anti-hero'. Well, Luna is an 'anti-anti-hero'. She's unlikable in an unlikable way. Example: When an old lady's cat ends up in a tree, Luna helps out by driving a car into the tree, the tree falls and squashes the cat. Luna is offended when the old lady doesn't seem grateful. Yep. She's just a turd. And sadly, [spoiler alert!] she doesn't die by the end of the issue.
Collapse