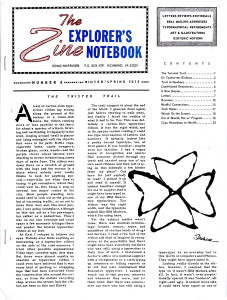 "Letters, reviews, editorials, real mailing addresses, typographical refinements, art & illustrations, esoteric notions" it says in a box next to the title on the cover. We're in the Zine Zone of No Computers here - a world also populated by Fred Woodworth's The Match!; Anthony Walent's Communicating Vessels; and Jason Rodgers's Media Junky. The format, size, and level of 'slickness' of these zines may differ, but one thing they all share is a passionate opposition to modern technology, especially the internet. These guys may actually even use the internet sometimes, but it sure doesn't take centre stage in their life. To put it another way, don't hold your breath for them to switch to a blog format; or a downloadable PDF.

The Zine Explorer's Notebook has come a long way since I last reviewed it [tZEN #3] - doubling in size, for one thing. The letter column is also a treat, and one letter in here especially - the one from a prisoner who admits to beating an 'alleged' pedophile and leaving him for dead, and being proud of it. In his response, Doug objects to this guy's self-righteous braggadocio.

Another fascinating letter is from Al Fry, who seems to be some kind of militant gardener, with his vigorous writings on weeds, Monsanto, and fluoridated water ["rat poison"].

I really appreciated the zine reviews too. Every zine really should contain reviews of other zines. You've probably heard that before, but for those who make a zine and don't include zine reviews in their zine, they need to hear it a few more times, at least until they wake the fuck up and start putting zine reviews in their own zine. Wake up! Grab a brush and put on a little make-up!
Collapse