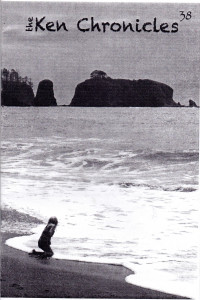 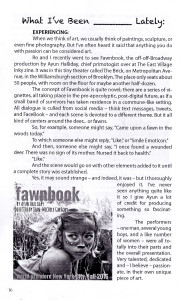 One of the greatest things about zines - or at least those few that actually have them - is the letter column.

Exhibit A: Fred Woodworth's The Match! and the bags of letters printed in each issue.

Exhibit B: Ken Bausert's The Ken Chronicles. This issue has four pages of letters, and one of them is from Don Fields [who produces his own zine, Twilight World], who writes a great letter. The main subject of his letter is about him noticing another letter-writer [and zine maker], Rodney L. complaining about the lack of letters he receives for each issue. Don goes on to explain why he isn't too worried about letters, and mentions a couple of other things, which led me to write Don a letter. Now I hope he writes me a letter.

After Ken's letter column is a 'Travelogue' of where Ken and his wife Ro went during August, September and October [not the least of which was a visit to Wo Hop for some Chow Fun!].

Next up, everybody's favourite [or second favourite, if it's not the letter column...] section - 'What I've Been ______ Lately'. This time Ken and Ro saw an off-off-Broadway production of semi-semi-famous zine person Ayun Halliday [The East Village Inky]. He also saw Joe Walsh at the Civic Center, and read The Electric Acid Kool-Aid Test. It was strange to read Ken's experience of it, remembering my own reading of it many years ago, and how it opened a new universe for me. A universe I had previously been unaware of!

Finally, Ken reprints an Associated Press release about the death of Holly Woodlawn, the transgender actress made famous by Andy Warhol and Paul Morrissey in their 1970 films 'Trash' and 'Women in Revolt'. Ken's note at the end, where he mentions that he read Holly's biography a few years ago, and found it "very interesting" yet "kind of boring" appears to defy the laws of Aesthetic Physics.
Collapse