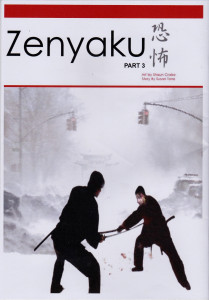 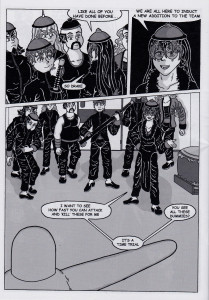 It's hard for me to believe that it has been just over TWO YEARS since I received a copy of Zenyaku Part 2, but there it is right there - my review from May 2015.

So it's just as well that this issue begins with a one-page recap, "The Story So Far..." Basically this guy Drake gets sacked from his job, then kidnapped by The Black Clan [a kind of samurai gang] who tell him that he is the son of one of their former [read: dead] members, so he will be forced to take his father's place. Meanwhile Drake's mother is also kidnapped by this gang, and we learn that she used to be with the King of the Black Clan until she ran off with one of the pawns [low-ranked member]. Guess who? Yes, Drake's father. part 2 ended with Drake undergoing some intense sword training, and ultimately being presented with a sword - his father's sword!

Pretty cool story so far, right? Right. So like HELL am I going to spoil anything for you. All you need to know is the art is up to Shaun's usual high standard, in fact even higher, and the story is well-paced and captivating, with all the intrigue and mystery of these opposing, chess-like Black and White Clans. Some of the dialogue does seem to be inadvertently comical ["NOW DISAPPEAR, SICKBAG."], but the only real criticism I have is the usual one - the appalling typos. An example - TWO misspelled words in this one speech balloon: "NO, NO, NO, I WOULD NEVER JEPODISE MY BUINESS, LET ALONE MY LIFE." [Also, I noted in my review of Zenyaku Part 2 that even the subtitle was misspelled - all three words! Well, with Part 3 only one word in the subtitle is misspelled. Improvement!]