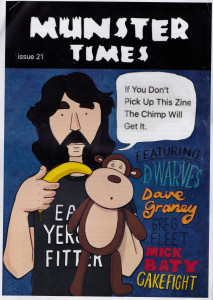 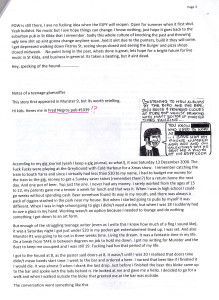 In Matt's 'Letter from the Editor' he notes the passing of Ms Izzy Cox, and describes her music this way: "It's the kind of music I could imagine being played on a jukebox in a smoke-filled pub in 1950s Texas while a bunch of characters straight out of a Raymond Chandler novel (where everyone is tough and hard and funny but not in a haha way) play pool and eye one another off." Then on a less sad note, rather one of derision, Matt writes that Mia Freeman made a dick of herself again. I had to Google Mia Freeman - she is the founder of Australian women's website Mamamia. But what she made a dick of herself about this time around is not revealed...

Anyway, loads of great stuff in this issue - interviews with Blag from The Dwarves; Dave Graney, and here's a great quote from that one: "...I do a show on RRR and I hear a lot of contemporary music, and I see a lot of new albums that come in and I'm amazed when I get acts that say it's their first album in seven years. And I'm like Wow, what is the point? You know, you are not that good to be taking that much of a break, that is the entire career of Jimmy Hendrix, or 2Pac. Get over it. Do something. If you're a muso you should record and play gigs. Taking seven years off is stupid."

Then three more interviews - Mick Batty of Melbourne record label Off The Hip; Melbourne two-piece garage band Cakefight; and comedian Greg Fleet. Part of the fun, of course, is finding out at the end when Matt asks them "What is your favourite The Fall album?" have they heard of The Fall? If so, have they heard any of their albums? If so, did they like it enough to listen to another one? And so on... Great stuff!

There's also a review of Dinosaur Jr at The Croxton on Friday 20 January 2017.
Collapse