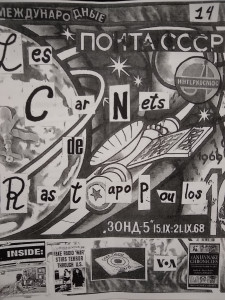 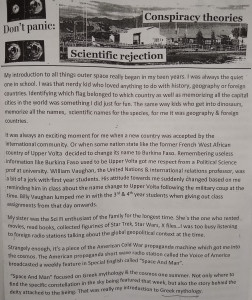 This issue's theme is 'Space'. Rob begins with some personal anecdotes, like being the kind of nerdy kid who was so into foreign countries, he memorised the names of the world's capital cities just for fun, and impressed teachers and professors alike by being the only student they had who knew that Burkina Faso used to be called Upper Volta.
It was Cold War-era radio show Voice of America that planted the BIG space hook in Rob's guts, with a series 'Space and Man', which got him into stargazing, and Star Trek. [Rob admits to digging Star Trek rather than Star Wars [me too! \m/]] There's speculation and theories about Near Earth Objects [NEOs] and the real possibility of Earth being struck by a population-decimating asteroid. Also some fascinating notes about 'Wormwood' - "Wormwood is either a star or an angel that appears in the Book of Revelations" - for example the Vatican's high powered telescope located in Arizona that some believe exists primarily to detect the arrival of this "Wormwood".
This is another really great issue. Write for your [FREE!] copy today!